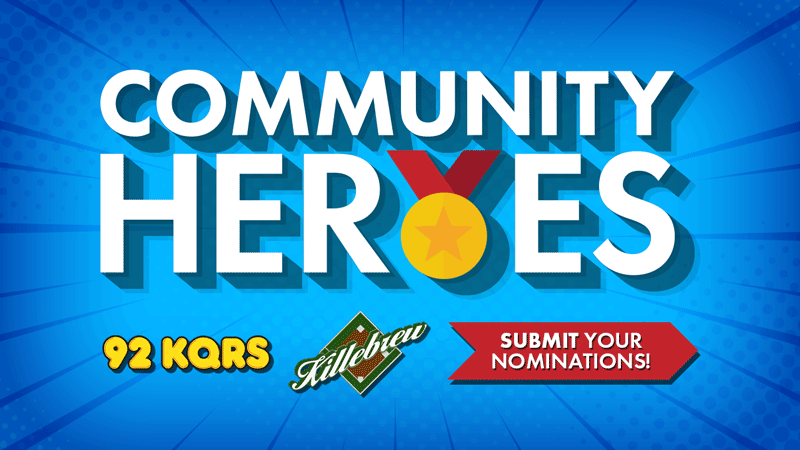 Covid-19 has negatively affected businesses and people across the globe, including right here in our community. Although much is uncertain, one thing remains clear: Minnesotans can and will rise above.

KQRS and Killebrew Root Beer would like to highlight individuals choosing positivity, extending generosity and helping others when the need is at an all-time high.

If you know someone on the frontline: a doctor, nurse, police officer, firefighter, grocery store employee, janitor, teacher, delivery driver, etc… or even someone who is going above and beyond for their community – we want to hear about them and highlight their story on the KQ Morning Show, on our website, and on our social media pages!

Nominate someone deserving today at 92KQRS.com/community-heroes! 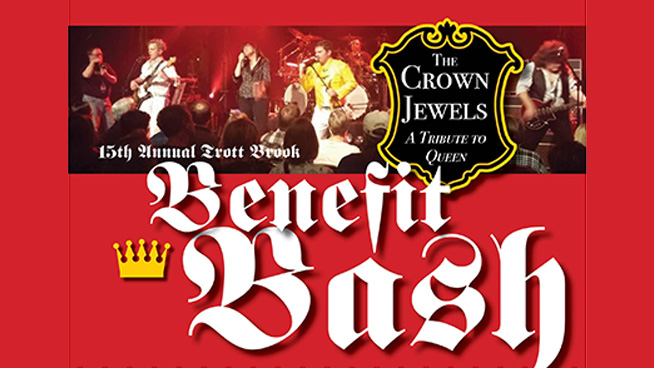 Killebrew Root Beer and North Lake Honey Brown Lager are pleased to be part of the sponsorship with The 15th Annual Trott Brook Benefit BASH.
Jim and Lisa Steffen have been working diligently toward this event and it will be the biggest Trott Brook fundraising concert yet!

The Crown Jewels will be performing a tribute to Queen, one of the greatest rock bands of all time!

The concert is FREE and there will be several awesome food trucks on site to satisfy your hunger, along with Killebrew Root Beer and North Lake Honey Brown Lager.

All Proceeds will again be donated to The Anne Talle / Anoka Area Chamber of Commerce Scholarship Fund and Youth First Community of Promise!
For information on corporate sponsorships, please Click Here

We know it’s no fun thinking that summer comes to an end, but we are excited about Anoka’s first End of Summer Bash! Wednesday, August 21, 6 p.m. – 10 p.m. at Riverfront Memorial Park in downtown Anoka – 2201 2nd Avenue, along the Rum River!

The Plott Hounds will kick it off with a 2-hour concert while we enjoy a free Ice Cream Social! Plus, purchase food from these great food trucks – Casa Rio Tex Mex Restaurant and Alimama’s Sambusa! Concessions (cash only), picnicking, yard games, a giant pumpkin inflatable bounce house, face painting, and our debut Movie in the Park at 8:30 p.m. (Disney Pixar UP), all add to this fun, family event!

Bring a lawn chair or blanket, sit back, relax and enjoy the music, food, and movie!

Killebrew Root Beer and Cream Soda are very proud to be part of the St. Paul Saints partnership team.

While we were on our way down to the field for pre-game ceremonial events, I noticed this young man enjoying a Killebrew Root Beer. I asked if he would allow me to take a photo for the social media, and he was okay with that.

On behalf of Killebrew Root Beer and our RJM Distributing staff, I would like to thank Derek, Sean, Tom, and the whole staff at CHS Field. They assisted with our special group of customers in the Club section – who enjoyed the game along with about 9,000 other fans, cheering on the Saints to a victory.

It was a special treat to have Mike Veeck in attendance at the game as well. I only know Mike through the St. Paul Saints, but he is a special man with many gifts. The cool part is that he shares these gifts with people and family around him. Thanks for being at the game Mike!

Although the season is getting close to the end, please consider taking the family to the St. Paul Saints experience at CHS Field. And while you are there, enjoy a Killebrew Root Beer – as you cheer on the St. Paul players. 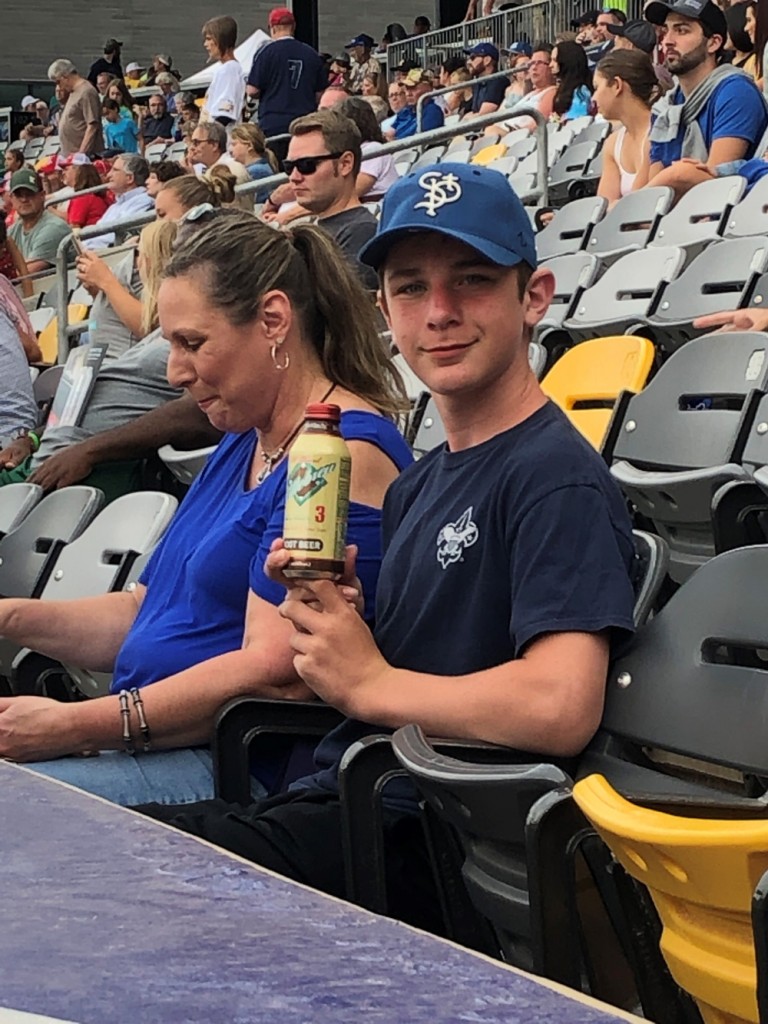 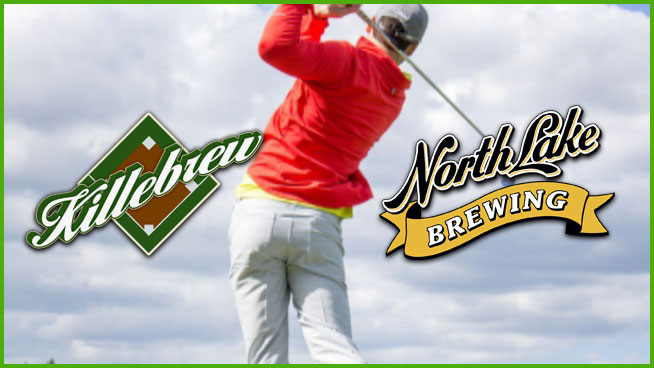 All proceeds from the tournament will go towards Anoka Alumni Club
The Anoka Alumni Club presents three $5000 scholarships to Anoka High School seniors to use toward their college / higher learning education each year.

Our goal is 40 teams (4 golfer per team) and as many hole sponsors as possible. 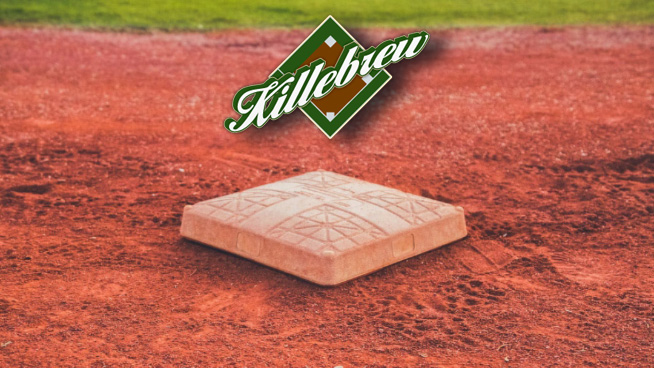 ST. PAUL, MN (April 25, 2019) – The St. Paul Saints have honored the Irish tradition each season since they opened in 1993. An Irish Night is one of the more popular promotional games of the season for various reasons, one of which are the unique green uniforms with an Irish flair to each player’s last name. It’s only fitting then, that this year the St. Paul Saints will take their annual townball game, presented by Killebrew Root Beer, to Green Isle, MN a town where many of its earliest settlers were from Ireland.

For the 12th consecutive season the Saints will play an exhibition game in a neighboring Minnesota city on a field known for its place in townball history. On Saturday, May 11 at 4:00 p.m. the Saints will take on the Crow River Valley All-Stars at Green Valley Isle Irish Field in Green Isle, presented by Killebrew Root Beer. The field is located at 310 McGrann St. in Green Isle. The All-Star team will consist of the best players in the league from 13 different teams (Brownton, Carver, Cologne, Glencoe, Green Isle, Hamburg, New Germany, Plato, St. Boni, Waconia, Watertown, Winsted, and Young America).

Much of Minnesota’s baseball history has played out on “townball” fields around the State. The Crow River Valley League dates back to the 1920s and produced State Champions in Plato in 1996, 2007, and 2015, Glencoe in 1998, and Green Isle in 2003. The league represents the role amateur baseball plays in the state of Minnesota.

Gates open at 2 p.m., with the Saints taking batting practice at that time, a 3:00 p.m. home run derby and the game beginning at 4:00 p.m. Little League players eight and under can shag balls during the home run derby.

The game against the Crow River Valley All-Stars will help raise money for their field, concessions and restroom facilities. During the game there will be a raffle, prizes given away, a silent auction and activities for the kids.

Tickets for this special exhibition game are $12 and can be purchased at the gate. Kids five and under are free. 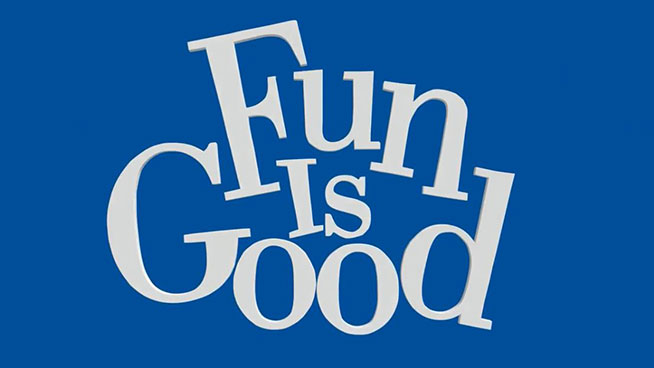 Fun Is Good is a seminar like no other!

Providing inspiration & insight on:
• CREATING JOY AND PASSION IN YOUR WORKPLACE AND CAREER
• TAKING SIMPLE STEPS TO INCREASE MORALE AND PROFITABILITY
• UNDERSTANDING EI (EMOTIONAL INTELLIGENCE) IN OUR MULTI-GENERATIONAL WORKFORCE
• TAPPING INTO THE POWER OF LAUGHTER, INNOVATION AND FUN
• KINDNESS AND GRATITUDE … GOOD FOR BUSINESS!
• BREAKING THE RULES … GOOD FOR BUSINESS?

What’s FUN got to do with it? EVERYTHING!
At Fun Is Good we’re passionate about helping individuals and organizations develop and sustain a positive, fun and creative culture for employees and customers alike. We believe that when people are allowed to work within their personal strengths and passions, they are more creative, more productive and more collaborative. When this happens, we know they’ll enjoy what they do and actually have fun in the process – resulting in greater customer satisfaction and success for the organization.
This full-day seminar is filled with inspiring and hilarious stories for both leaders and individuals about values, change, customer service, teamwork, community and fun! Our team will not only make attendees laugh but will also challenge them to get out of their comfort zone and into an environment where unique partnerships, promotions and engaged employees equal increased profits and success for any individual or organization.

This year’s Fun Is Good presenters:

It was all new for us. Twins fans were in love with Target Field. 3.2 million of us went to the games that year.
The Twins had good team and made the playoffs. Home Field advantage vs. NY. (we will stop there….)

With the Twins playing much better baseball over the past few days (vs. Cleveland and Boston) and with the forthcoming (July 29th) 2018 Hall of Fame induction ceremony coming for Jim Thome – we thought we’d share this ‘oldie but goodie’ from August 2010.

Please enjoy the walk-off call by Alfonso Fernandez and Tony Oliva – as Jim Thome hit the walk off Home Run at Target Field!
(It was a Bomb…and I think it hit the right Field flag pole or it still might have bounced to the Target Center!)

Since I do not understand a lot of the Spanish language, I am not exactly sure what they are actually saying. But is all good.
My baseball friends; this is some amazing enthusiasm for a fun moment in Twins History.

Sample free Killebrew Root Beer and Killebrew Cream Soda on June 21 at The Draw in Ramsey.

Enjoy a live performance from classic country-rock band, Roadhouse Blue at The Draw Amphitheater from 6:30pm-8:00pm!

Marty Scott has been in professional baseball as a player, minor league manager (with the St. Paul Saints 1995-2000), and executive front office player development with the Texas Rangers and Florida Marlins.

Marty is another perfect selection to the Killebrew Professional Scouts Hall of Fame, as he is a solid judge of talent and player character. He is honest with the players he worked with and he has supported these players more times than they will ever know.

We are pleased to add Marty Scott to the wall of bronze plaques at the Killebrew Root Beer Professional Scouts Hall of Fame in Ft. Myers, Florida. 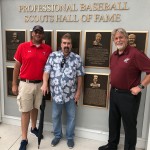